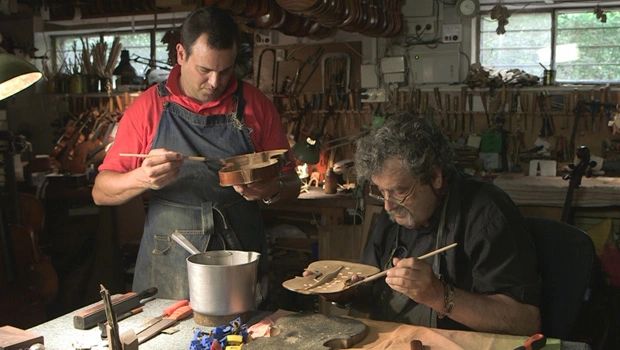 A Night of Music and Memory - Virtual Event

"Music has the ability to move us, calm us, and help us. Let's honor the importance of music in our lives."

Please join us for another virtual event of music and memory, when we remember our history and celebrate our future.

This program includes stories of the past together with music played by select musicians including very accomplished young prodigies, to lift your spirits in anticipation of the return of the Violins of Hope collection in November. We hope to have our rescheduled program in-person, via concerts, exhibits, lectures and meaningful events.

There is no charge for this event, but registration is required. Please reserve your spot by clicking the "book" button in the section below.

You will receive a link to the program during the week of September 27th.

Violins of Hope is a program of remembrance and resilience, spoken through the universal language of music.

"The Return of the Violin" Virtual Event

Message from Susanne Reyto, Chair of Violins of Hope

Thank you for joining us for both screenings of The Return of the Violin. We had a great response and according to all your emails, calls and texts it was a very moving experience and very much appreciated for bringing this information to you.

For those of you who did not have a chance to join us, this film, told through the eyes of a Polish Holocaust survivor, Sigmund Rolat, who dreamed of seeing the instrument return to his hometown, Czestochowa, Poland and through his great effort and major contributions, bring back Jewish culture to Poland. It also documents the story behind the theft and reappearance of a 1731 Stradivarius once owned by Bronislaw Huberman, who saved Jewish musicians during the Holocaust and founded the Palestine Symphony, later to become the Israel Philharmonic Orchestra.

History, intrigue and triumph are the hallmark of this documentary. This precious violin was stolen not once but twice. The first time in 1919, when it was recovered within a few days. The second time in 1936, and it took almost 50 years to resurface when the thief made a deathbed confession. It was finally acquired by famed violinist, Joshua Bell, who considers this violin to be his most precious possession.

Haim Hecht, the director/producer of the film, whose family is also from Chestohowa, Poland, introduced the film in a pre-recorded interview from Tel Aviv. Following the screening we had a live Q&A with the editor of the film.

We plan to see you again, virtually in September. Enjoy the rest of your summer and stay well. The Violins of Hope collection returns to Los Angeles in November and we will be able to welcome you at in-person events.

Until then, fond regards,

Since we cannot be together in person yet, hopefully very soon, we are bringing you an amazing documentary of Bronislaw Huberman, the electrifying Polish violinist, who made history in 1935-1936 by saving Jewish musicians from Nazi persecution.  Huberman created a cultural phenomenon in Palestine with the founding of the Palestine Symphony Orchestra, which later became the Israel Philharmonic Orchestra.

This film, Orchestra of Exiles, not only documents his humanitarian and artistic rescue missions, but also has special meaning for Violins of Hope. The film features interviews with Amnon Weinstein, founder of Violins of Hope, discussing  how many of the orchestra musicians had their instruments repaired in his workshop and how they came to be included in the Violins of Hope Collection.

After the screening we will have an in-depth discussion and Q and A with Josh Aronson, the Producer/Director and writer. You don’t want to miss it!

Stay safe and well and see you April 15th.

Q&A with Director of Orchestra of Exiles

Due to distribution rights, we are unable to provide a full screening of the movie; however, you can still  view the Q&A featuring the film's Producer and Director, Josh Aronson by clicking the forward arrow on the photo.

We are thrilled that so many of you viewed our Virtual Reimagined Opening Gala. It illustrated the depth and breadth of Violins of Hope, and the great need for us to work toward combating hatred, bigotry and anti-Semitism. No matter where you are, this is a universal issue facing the whole world.

Thank you so much for your incredible supportive comments and kind words of encouragement to continue this mission of educating our next generations so the tragic past would not be repeated.

History is the foundation of our future and young people must learn real history to develop the strength to stand up against hatred. It is also our obligation to teach lessons of tolerance in our world of diversity and multiculturalism. Hopefully, this will ensure that our future generations will live in a world of dignity and humanity.

We have survived as a result of rescuers, and Amnon and Avshi Weinstein are doing their share, not only rescuing but restoring the instruments to come alive and speak to the world through the language of music.

We appreciate your tremendous support and we will continue to bring you meaningful programs until the Violins return to Los Angeles. We promise to present an equally rich and broad program as originally planned.

Until then, stay safe and well,

Israeli violinmakers, Amnon and Avshi Weinstein, have devoted the last 20 years to locating and restoring violins of the Holocaust as a tribute to those who were lost.  This is their contribution to humanity. Today, these violins not only serve as powerful reminders of an unimaginable experience, but also reinforce key lessons of tolerance, inclusion and diversity that are essential for today and for future generations.

Watch this video to learn more about Violins of Hope in LA County.

Our Partners - Click on logo to connect to websites

Do you have questions or comments about an event? Do you need special accommodations? Send us a message, and we will get back to you as soon as possible.